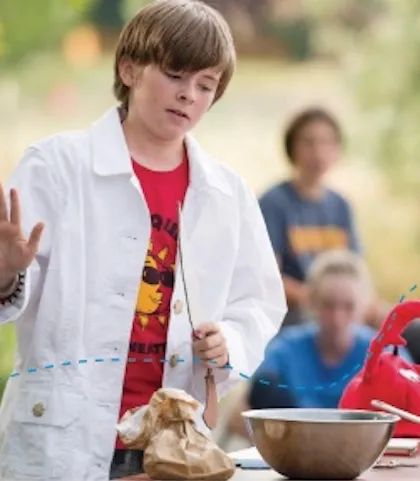 Want To Be Someone New For A Month?

The hats are what grab my attention. From the homemade duct-tape creations worn around our camp on Superhero Day and the floppy Shakespearean hat borrowed from the costume closet by a camper calling himself Duke of the Foursquare Court to the bright green top hat worn in a comedy improv scene by a singing Leprechaun hunting for where the Martians hid her gold… Par for the course, I suppose—we are a theater camp, after all. But, to me, they represent something more.

I never went to summer camp.

It wasn’t until I ran a theater program, the camp where my wife Katie spent her childhood, that I really understood what summer camps can do.

Kids are in a constant state of re-creating themselves. Each year they become a different human being, both literally and figuratively. They get taller – that one’s easy to deal with; time to get another pair of jeans a few inches longer. But they also change who they are in the world, and who they want to be. And that – in the world of school peers, teachers and best friends – is not so easy.

Their peers hold kids in place, their personalities pinned to one spot by the expectations of the other kids. Shy, goofy, abrasive, smart, outgoing, irresponsible, a jock, a nerd, a theater kid… once defined by their peers, kids are held to that definition. They’re stuck with it, whether that matches who they actually are or not. And given how quickly kids change, usually it does not.

This, I’ve come to see, is the miracle of summer camp: Summer camps create a place where kids can reinvent themselves. The child enters a world completely outside of his or her school-year life with a small number of their peers and none of their school-year authority figures. Instead, they’re surrounded by a group of new peers who are eager to find out who they are under the guidance of camp counselors who want nothing more than to find out what will make that child feel happy and confident today.

This is no accident. Camps very intentionally build this into their philosophy, their culture and the training of their staff—supporting the children to be whoever they want to be.

And the kids respond; they see it immediately. They’ve been waiting to try on the hat of the more outgoing person or the person who isn’t always the center of attention or the person who others look to for help or the person who’s not afraid to dance—and they put it on right away. Sometimes the hat fits, sometimes it takes some getting used to and sometimes it’s exchanged for yet another hat a few days later. But what’s important is the freedom to try it on and the support of a smiling camp community saying, “Hey—nice hat.”

It’s possible that we’ve been able to see this especially clearly at our camp—as I said, trying on different hats is literal as well—but this is true for all camps. We accept kids just as they are—their quirks, their fears, their playfulness. That’s our entire job. And when kids feel that support, they blossom. They’re safe to not only try out a new identity, but new sets of skills as well. It’s not at all surprising to see a camper who was scared to go onstage in the beginning of the camp session dazzling the audiences by the end.

“That singing comedic Leprechaun in that scene—do you remember how shy she was on the first day of camp?”

If the Leprechaun hat fits, wear it.

Soren Kisiel, and his wife Katie Goodman, are the founders and Camp Directors of Camp Equinox, a theater day camp in Bozeman. For more information visit campequinox.com.

Mother’s Day… A Year after a Quarantine

As I sit here, glass of wine on the table, kids in bed and my husband folding laundry, I can’t stop thinking about what a year it’s been.

Zoey's Recipes for Success: May

Trips, Tricks & Shortcuts in the Kitchen

5 Ways to Celebrate your Graduate this 529 Day

Graduation is not just for high school grads!