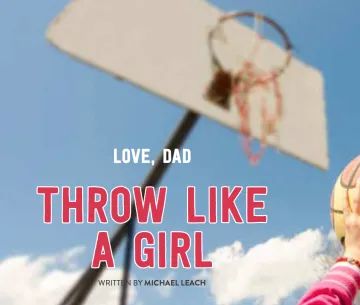 I still recall the moment like it was yesterday. Living room packed with family and friends, the energy of our little football gathering was magnified by the fact that our Seahawks were back in the Super Bowl. Distracted by conversation, kids running from one room to the next and a smorgasbord of good eats, I only remember one commercial from last year’s Super Bowl—but I remember it vividly.

The little girl with the freckles immediately captured my attention. She couldn’t have been much older than my daughter. There was a seriousness about her that drew me in. Within 30 seconds of watching, I asked my dad to pause and play it back. This commercial pulsed with a “girl power” message that I wanted—felt I had—to share with my little one. I called her away from the chaos of kids; and together, we watched the most impactful television commercial I’d ever seen.

Fast-forward a year. On the eve of her first basketball practice, I could tell my daughter was apprehensive when she learned her team would consist mostly of boys. The previous winter, playing only against girls, she shined. But, for whatever reason, I’d noticed recently that when she played against boys, she became less engaged, more self-conscious and timid.

My reason for wanting my child to play basketball is simple. As a high school varsity basketball coach for nearly a decade, I witnessed firsthand the tremendous—perhaps unmatched—power that sports can play in building confidence, trust and a sense of self, for boys and girls alike.

And as a proud father to a little girl with a heart and spirit the size of Montana, like most parents, I’ve made it my mission to help her feel comfortable in her own skin and believe in her limitless potential. But in recent years, it’s become about more than that.

That Super Bowl Like-a-Girl commercial captured it perfectly. What I want is for her to take pride in doing things “like a girl.” Each year, I see my little one becoming more inhibited, paying more attention to how other people perceive her. This worries me.

So, what does a dad do to enhance his daughter’s confidence? I write her notes, tell her how proud I am to be her dad, and – on this eve of her first co-ed basketball practice – I turn to YouTube. Sitting together, my 8-year-old and I watch a short documentary about Mo’ne Davis, the 13-year-old Philadelphia phenom who, as the only girl playing with the boys, took the Little League World Series by storm this past summer. My daughter was mesmerized. Here she was, a girl who boys wanted to play like. As she watched Davis swing, throw and shoot baskets with graceful ease, I could literally see my girl’s body straighten, chest out and chin up.

We spent the next 20 minutes watching one Like-a-Girl commercial after another. Just as I had months earlier, I couldn’t help but tear up. When we were done, my daughter turned to me and asked, “Why did you cry about those videos, Daddy?”

“Because I love you so much,” I answered. “And because you run like the wind, you throw with such strength and you shoot a basketball with ease.”

My message to my 8-year-old that night was simple: To do things like a girl is to be fierce, powerful, graceful and courageous.

In a world where girls are objectified on television, in magazines and in music lyrics, where scantily- clad images have become the norm on Instagram, and where one in five college-aged girls will be sexually assaulted while pursuing their degree, I can’t help but believe the message we share with our children now is more important than ever.

As all parents know, sometimes we have to get creative in our messaging. This can mean reaching out for inspiration. It’s easy to walk through the motions of parenting when exhaustion sets in

and the entire week feels as if it were a blur. But when we are able to be intentional enough in our interactions to develop a game plan, we have the option to lay the foundation for a mind-set that will help our children break out of the box of cultural norms and thrive, even when things get tough.

The mind-set we help our kids develop at an early age can be a game changer as they uncover their emerging sense of self. That night, and several times since, I have seized upon the Like-a-Girl commercials to help me do just that.

The note in Kamiah’s lunchbox the next day was pretty straightforward.

“Whatever you do, be proud to do it like a girl. Love, Dad.”

Michael W. Leach is a father, author, motivational speaker and rabble rousing green guy. His latest book Be Audacious: Inspiring Your Legacy and Living a Life That Matters, propels millennials

to change the world. His blog BeAudacious.com is basecamp for adventurous people striving to live extraordinary lives. He lives, loves and dreams with his wife and daughter in Bozeman, Montana.