The Triangle of Emotions—Session 29:  On the Couch with Dr. Kelsch 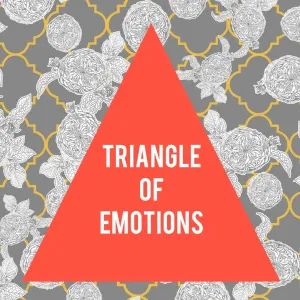 “I am so worried that I want to scream or cry about it.”

This is a statement containing three thoughts that I often hear in my office. I like to teach my clients that anger, depression and anxiety are the same emotions expressed in different ways; they are three equal sides of the same triangle, which can be rotated easily and placed on another side without warning. As parents, we see these emotions in our children and it may help us to deal with situations better if we realize they are the same feeling, being expressed in one way.

According to Merriam-Webster, the definition of these three words is defined below.

Anxiety: Painful or apprehensive uneasiness of mind usually over an impending or anticipated event; fearful concern.

(Children commonly experience anxiety on the first day of school as well as the last day of school, before summer camp and even when choosing what to wear for a school dance. Other more significant anxieties revolve around divorce, parents dating again, or trying out for a sport that cuts those who don’t meet the mark.)

Anger: A strong feeling of being upset or annoyed because of something wrong or bad; the feeling that makes someone want to hurt other people, destroy property, shout, etc.

Depression: A state of feeling sad or a serious medical condition in which a person feels very sad, hopeless and unimportant and often is unable to live in a normal way.

Toddlers flip their triangles all day long. They throw tantrums, suck their fingers and cry within minutes. We figure they are just children, but this happens to us throughout our lives.

Here’s an example of the triangle flipping quickly: a pre-adolescent I know tried out for a geography bee at school. She studied 30 minutes the night before the bee figuring she knew enough to compete nationally; she was not anxious, but very excited. The morning of the bee, she was anxious; and then after she did poorly at the bee, she was angry, accusing anyone who did better than her of cheating. She feigned illness and did not go to school the next day. In the evening, her parents were able to get to the bottom of the situation. Had they stopped and thought about her reaction the day before, they could have been prepared for the flip to depression after anxiety and anger.

Another more frightening example of the flip can be seen in cases of suicide. Depression is anger turned inward. Often depression begins with anxiety about life situations that feel insurmountable. It may be reflected in inappropriate anger directed at others before it turns inward and the only escape that seems feasible is the ultimate selfish act of killing oneself. This is our greatest fear as parents – to not recognize the triangle when it is most important.

An acquaintance of mine was a bit apprehensive about getting the promotion he was promised after his employee review. The day after the review, his company promoted a subordinate employee and he was royally ticked. He felt like nothing ever went his way and never would. But he eventually gained control of his triangle, took control of his actions and began looking for another job in the same field.

The truth is that in the first three situations, the individuals could have made different choices and done something different with the triangle feeling. The toddler could be taught self-soothing techniques, the pre-adolescent girl could accept her negligence in preparation for a national geography bee and the suicidal individual could reach out and ask for help from a loved one. It was the employee who made that difficult step to gain control of his feelings. Making difficult decisions and accepting responsibility is the first thing that individuals need to make; none of these steps is easy, but they all can be done.

So…watch your triangle as well as those you love.

Dr. Donna Kelsch is a licensed professional counselor with Tri Therapy. Tri Therapy provides counseling and assessments for teens, couples and families. Call 406-404-1009 for an appointment or contact her via web at tritherapymt.com or email d kelsch@tritherapymt.com . Dr. Donna lives in Bozeman with her husband and three children.