Raising Teens: Not for the Faint of Heart—It’s OK to Let Your Child Fail 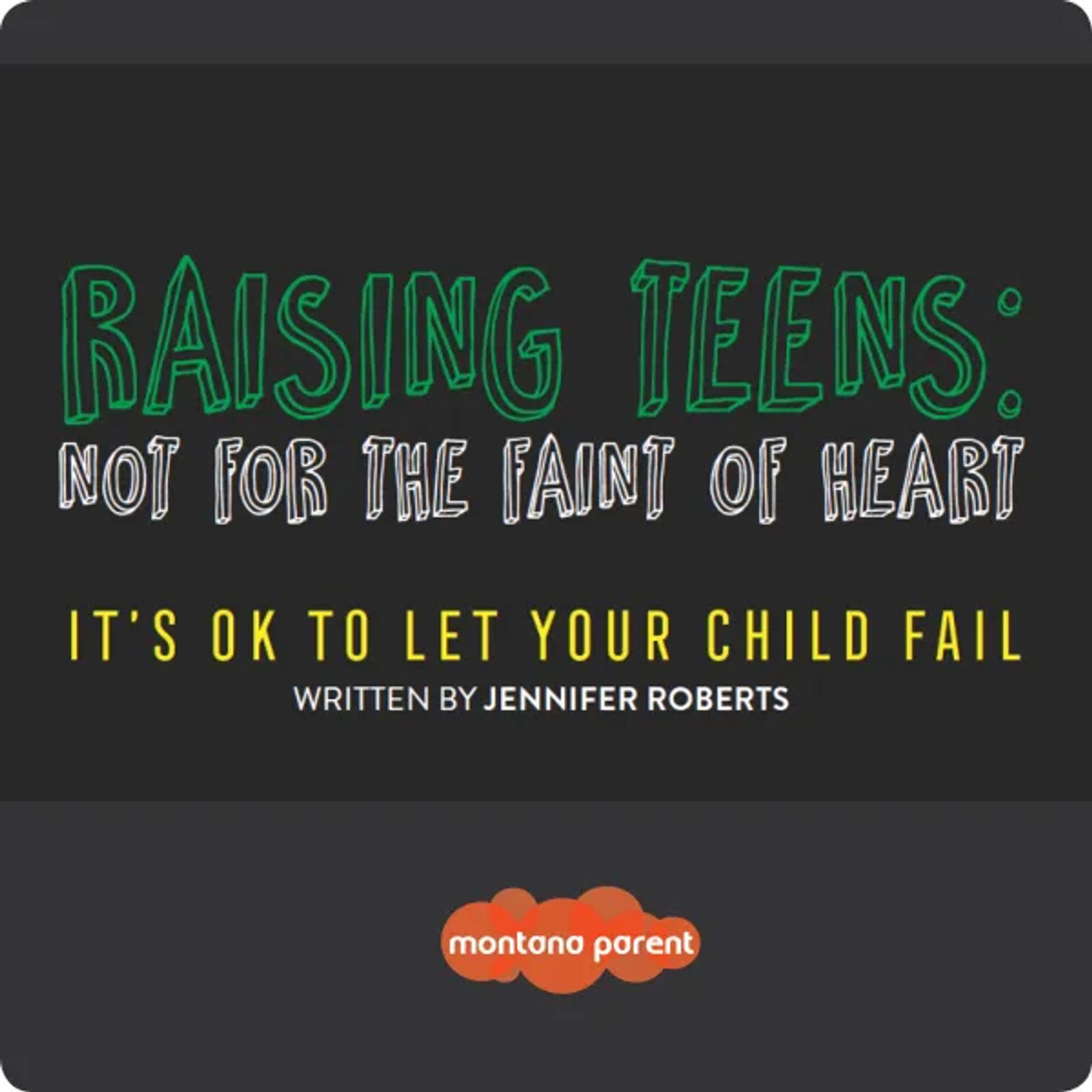 Falling is hard; those first tumbles when they begin walking or the scraped knees when they learn to ride a bike can hurt a parent’s heart more than a child’s body. Our first reaction is to hold them up and save them from the pain of falling. It is our job to keep them safe and protected from all the things that can hurt them, and that list can be long. But falling is also a learning opportunity. Children learn that getting hurt is not the end of the world. Bruises and cuts heal. Hurt feelings and embarrassment heal. They may also learn how to prevent themselves from falling in the future. Their falls can be life lessons that carry them into adulthood.

Our job as parents is to be there to pick up the pieces and set our kids back on their path. As much as we want to, we cannot always rescue them. The lesson can be lost if we intervene, pay the fine or prevent the fall altogether. Every one of my children has had to pick themselves up. I have been present every time. I stand beside them. Guide them to a plan. Wipe their tears. They have survived. Stronger, smarter and more prepared to live their lives fully.

I tell my children that good, bad or indifferent, choices have consequences. Doing nothing is still making a choice. I was called to the high school for a meeting to discuss my youngest son’s academic progress. It was October. How much academic progress could have been made in six weeks? Not much at all, apparently. Every teacher, his academic counselor and the vice principal were present and all sitting on one side of the table. My son and I sat across from them. Let’s just say he was not receiving any honors or awards. Not only was he not going to meet graduation requirements, he had missed 56 class periods since the start of the school year! What?

I looked at him with what can only be described as my crazy mom face. You know, the one where your eyes are about to pop out of your head, your forehead is scrunched to one line down the center and your jaw is clenched so tightly you’re certain to have a headache in 2.5 seconds. No signs of drug use; happy kid; no fighting; good friends – so what the hell was going on? Apparently, he had better things to do. As the questions flew about who was to blame for the skipping and all eyes were on me (because every teacher at the table believed it was something I was doing at home), my son just sat there wide-eyed. He was hoping that dropping out and getting his HiSET (high school equivalency credential) was an option. Nope. Not today. I agreed with them that alternative school might be his best choice for graduating on time. We had tried summer school and, frankly, I wasn’t going to pay for that again.

Before heading to the guidance counselor’s office, the two of us sat alone in the room. And what did he do? He started yelling that I had thrown him under the bus. Really? He skipped class. He was the one failing. Nothing to argue there! The decision to stay at school was no longer in his hands. It was in mine. He was angry and so was I. Not just angry, but embarrassed and ashamed of my parenting. In the counselor’s office, the tears came – mine, not his. His eyes shot daggers at me, and he was blowing up my phone from just three feet away. This continued all morning. My phone buzzed in the seat beside me as I drove to work. I read the texts in the parking lot before heading in, tears hot and flowing but I refused to respond. Eventually they stopped.

Did I do the right thing? Should I have defended him? WHY didn’t he want to be at school? Did he have a drug or alcohol problem that I was missing? Did I just do irreparable damage to our fragile parent/teen relationship? Maybe letting him get his HiSET was the answer. I called my husband. I called my sister. I called my mama tribe. And then my phone buzzed. It was him. “I’m sorry, mom. I did this. I have to do the right thing. I love you and I’m really sorry.”

Jennifer Roberts is the mother of a blended family that includes her husband of 21 years, stepson, nephew, son, daughter and countless teenagers who love to hang out around her kitchen ranging in age from 15 to 25. On any given day, you can find her mopping mud off the kitchen floor, breaking up wrestling matches or trying to figure out where her mascara disappeared to! Find more stories about raising teenagers at  raisingteensnotforthefaintofheart.blogspot.com .