Our family has encountered its share of camping mishaps. 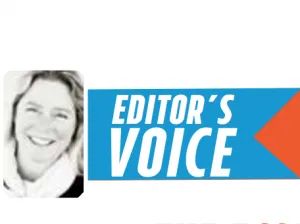 An awning ripped from the camper during what felt like 70-mph winds. Five straight days of rain and 50-degree weather on a trip

to the lake. Once, I opened the camper to find the refrigerator door had popped open during the drive and all of our food for the

weekend had been flung all over the floor. We’ve forgotten the propane, an axe, encountered dead batteries on the lake . . . in the

rain . . . but – out of all those ordeals – one incident in particular takes the cake.

My youngest has a best friend who lives in Missoula; she’s her Poopsie. We have been camping with Poopsie’s family at least

twice a summer since the girls were 4 years-old. I love everything about their friendship: they embrace the outdoors, ride bikes,

swim, ski and belly laugh together. Best of all, though, is the way that their respective imaginations come alive when they play.

I’ve witnessed them mimicking wolves, running around the yard howling for each other. They’ve pretended to be dolphins on the

lake and Top Chef at the campsite, using nothing more than sticks and moss. From Barbies to a pile of rocks, everything they touch

turns into a game.

When the girls were 5, we brought our four-wheeler on one of our camping trips. The husbands had been tooling the kids around

for a few days, and it was nothing short of amazing for them. One particular evening, we were all sitting around the campfire

making s’mores, when we became startled by a noise – the growl of a four-wheeler’s engine. You know those moments in life when

you freeze, unsure how to react? This was one of them. We all stared at them, panic stricken.

My child just sat there on the four-wheeler, staring back at us like a deer in the headlights. Her Poopsie had not frozen, she had run.

Fight versus flight. Not to fear, however, neither girl had any idea how to make the four-wheeler go and both were subsequently so

freaked out that they didn’t get back on the vehicle for the rest of the trip, not even with an adult.

So, you might be wondering, why did they even bother? They were playing dad and daughter and pretending to drive –

We learned two lessons that night.

One, we all know where my daughter’s Poopsie will be when things go bad – running away.

Two, NEVER leave the four-wheeler keys in the vehicle.

I am abundantly aware of how terrible this situation could have turned out. Parents,

like children, do really stupid things sometimes. It’s the lessons we learn from them that