Notes From a Working Mom On the Road 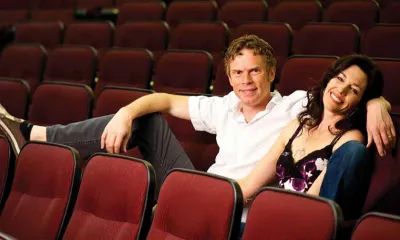 Well, another school year is winding down, and MOM IS TIRED. Anyone else? Good grief. It’s been a doozy. We live in Bozeman in the summer (thank God!) and New York City during the school year. Here’s all I have to say: PUBLIC high school applications. What? Ridiculous. But my kid and I made it through the process with our relationship intact, all while I traveled as a busy working mom. As a traveling comedian (it’s like a traveling salesman only I have a suitcase filled with cute heels and a wireless microphone rather than toilet brushes), I am in a constant state of worry that I’m not fulfilling my job as a parent. “Wait, you already learned all about the Civil War? When did THAT happen?” I came back recently and my kid was my height. I don’t think that was the case when I left only a week before. But the part that gets me ----

This is Soren here, taking over for Katie. I notice she left this open on her desktop before heading out on tour, and I know the deadline for Montana Parent is this week, so I think I’d better take the hint and ghostwrite it for her... Let’s see, I’m guessing “the part that gets me” is the enormous guilt she feels in her working-mom situation—a new CD, an Off-Broadway run of Broad Comedy, all things requiring a lot of attention when it feels like her attention should be on her son preparing to head into high school and needing help with French homework. And while, indeed, I can’t help with French—except for that one time gluing the popsicle-stick-French-Revolution-guillotine together—I’m going  to have to disagree with her here. What’s important to our son is her priorities, not that she’s here every moment. He sees that she’s busy in the world, and a part of the world and that in the midst of that hurricane she cares very deeply about him and holds him as more important than any of that.

Actually, Soren, I knew I’d be back in time to meet this deadline, ‘cause I’m a pro thank you very much, but I appreciate you watching my back! And what I don’t think you understand is that mothers have a much heavier cultural expectation, a greater weight to be home and involved – even in today’s world, when we know better. And while your and my comedy work tries to highlight that kind of sexism in our culture, sometimes it’s hard to notice that it’s been internalized anyway. Hence the guilt.

OK, she just zipped off (guitar on her back) to her show tonight, so I’ll just butt back in… This is a very new world, Katie! I can remember my dad heading out on business trips, briefcase in hand, one of those beige 1970’s suit-holding suitcase-things draped over his arm, and I was proud of him. He was going off to make the world happen. And while you’re right, that memory has a cultural ring of the 1950’s to it— the father heading out on business, the mother staying home— there’s no reason at all to think that is built into our son’s cultural expectations. If BOTH his parents make the world go ‘round, even better. Heck, he and his classmates regularly refer to friends as gender-fluid, so he’s certainly not expecting Ward and June Cleaver as parents.

OK, I’m back. And Soren, stay away from my computer. How did you guess the password? I thought “JudeLawFanGirl2017” would be impossible to guess. But at any rate, picture me, when I head to Montana in June to run our Camp Equinox, and he’s still in school in NYC for another three weeks, and even graduating from middle school without me…

Sorry, just one more thing, then I’ll leave your keyboard alone. Speaking of . . . Do you ever wash this thing? I’ve got a spray that will get the hummus off of it. I was talking with him about that just the other day. (I mean you being gone for camp, not the eating while typing.) We were strolling to his rock-band practice, guitar on his back (just like his mom!) and I thought it would be a good time to explain how badly you want to be here for his middle school graduation.

He turned to me, surprised, and said, “That’s so nice, but then who’d run the camp?!”

He gets it. Don’t worry. He’s proud of his mom.

Sigh. OK. Could someone remind me of that, like, every three days? Thanks.

Katie Goodman and Soren Kisiel are the founders and Camp Directors of Camp Equinox, and the author-directors of Broad Comedy. Look for their work on Katie’s new comedy CD, “Halfway Closer to Dead,” available at Cactus Records and wherever you buy music online.