Momma, How Much Does Time Weigh??

Ask yourself,  When is the last time you laughed so hard, you couldn't catch your breath, and you were doubled over, gasping for air?

Doesn't it feel great to have a deep, hearty belly laugh?

I love it when it happens. It's a sweet, unexpected surprise, like finding a dollar bill in the self-check stand at Wal-Mart.

I recently chatted with a friend and former colleague who is now a stay-at-home mom to two little darlings - a 3-year old son, and an infant daughter. She's living the Mommy-hood dream. She has a wonderful life. And I can't think of a single person who deserves it more.

After the simple pleasantries, our conversation turned to my friend's 3-year old son, Jack, and his non-stop antics.

I love this kid.

He's a riot - full of piss and vinegar  - and says the best things. He's three, after all.

Anyway, my girlfriend shared how she was attempting to live healthier, and lose some weight.

My friend has really struggled recently. Only a few short days after the birth of her precious daughter, my friend's  mother died unexpectedly. It rocked my friend to her core. It was nearly too much to cope with all at once.

And as usually happens with life throws you a curve ball, you duck and hide and wait for the pain to go away.

Now, several months later, my friend is doing her best to get her life rolling again, and to return to her pre-baby body. And like any woman concerned with her weight, my friend has a scale in her bathroom to measure her daily progress.

Begrudgingly, she steps on it everyday, hoping for some scale-worthy love.

Jack is fascinated with the scale, and several times per day brings various items from around the house and places them on atop the mysterious device, then waits to see if the pointer moves. He loves when the pointer moves. Only the items Jack can carry don't produce the results he seeks.

When Jack places an item on the scale, he asks, "Momma, how much time is this?"

Jack is un-phased by the time/weight conundrum, and continues to search for interesting things to weigh, and is mostly disappointed that the pointer refuses to budge from its original spot.

The very next morning, like my friend does each day, she gingerly steps onto the scale, optimistic of the "lighter" result.

Jack is standing next to her, peering down at the scale.

When he sees the pointer begin to move, his eyes light up.

Exasperated and excited beyond belief, Jack screeches, "Momma! Look at how much "time" you are!" 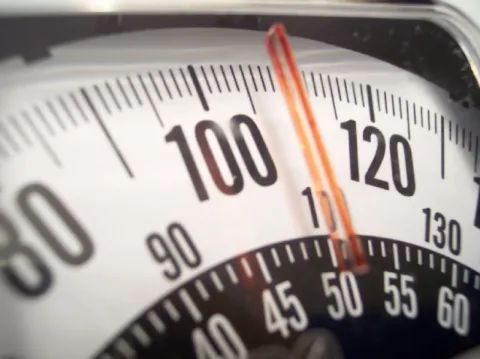 Mother of three, Katie Walters is the author of  An Authentic Life , a member of BlogHer.com and is proudly invited to share within the pages of Montana Parent Magazine's website.