I’m sentimental—the kind of sentimental that leads me to hang onto tiny bottles of sand after trips to the beach, to take 40-900 pictures of a single YMCA soccer game (just a regular game, not a championship), to post regular(ish) updates to Facebook, to…well, to write blog posts about moments that would otherwise possibly fade into the background clutter of life.

This week, two pictures of me with my son demonstrated just how odd the world really is.

I have plenty of pictures of myself with my father—pictures of us digging out stumps in the backyard after a particularly violent windstorm nearly sent some of our trees crashing into the neighbors’ house, pictures of us posing awkwardly on a rock in Colstrip, pictures of us raking leaves (that thankless Autumn task) and splitting wood (that thankless task year-round).  There are even pictures of us golfing, although I golfed for only a few years and never, never enjoyed it.  Not counting that single time I hit par.  Seriously.  One time.  I was not a good sport about being a bad golfer, yet, in the pictures, I look like I’m enjoying my time with my father.

I’m sure I was.  But I’m never picking up a golf club again, either.  The memories will have to be enough.

My son’s like me in a lot of ways, some of them good.  Like my father, I have a certain…obsessive approach to lawn maintenance.  I sharpen my lawnmower blade regularly, despite the fact that, a couple summers back, the practice landed me in the ER and got me my first set of stitches.  I have a pattern I follow when I mow, and I probably don’t ever alter it unless I very deliberately think about it.

But John just turned eleven, and his financial needs have now reached a point where he has to work to meet some of them.  I’ve funded everything until now, but his need for folding money for expenses when hanging out with his friends has passed my fuzzy approach to household economics across the last decade.

Which landed him behind my lawnmower, taking care of that chore for the first time.

We have a big yard.  It normally takes me four beers to get through the job, not counting the time I spend dragging hoses around afterwards to get some water going.  My mower isn’t light.  For several hours, I walked John through the mowing process—starting the thing for him (since that seems to be an acquired skill—he’s tough enough but just doesn’t have the knack yet), giving him a general tutorial in the logic of what I mow and how I mow it, etc.

As I watched, my wife snapped a picture (several, really).  In one, John valiantly pushes the mower across the front lawn…as I stand on the walk, drinking a lukewarm beer and supervising.  I waited eleven years to drink that particular beer, a Coors Light.  I didn’t keep the can, but I’ll keep that picture forever.

Later that same day, John and I took another picture.  In it, we stood side by side, facing the camera.  We were on the gondola from Orgrimmar to Tirisfal Glades.  Orgrimmar, naturally, is the central city of Orc culture, of course, while Tirisfal Glades is the undead-haunted blight on the map of the Eastern Kingdoms.

If that’s all nerd-speak nonsense, then you don’t play World of Warcraft.  My son and I do play, and it’s Warcraft that’s led him to his need for money, since a monthly subscription to the game runs him about $15.  One lawn mowing, basically.

That picture is awesome, with his Orc hunter standing next to—looming over—my zombie hunter.  I love it.  It’s an image of the two of us heading to the Eastern Kingdoms for the first time, an image of us doing something together in this still-open window of time where he wants, and needs, to be around his dad.

There will be a day when he doesn’t want to play this game anymore—at least not with me.  But that day isn’t this day, and that picture of us together online is as meaningful and sentimental to me as is the image of John mowing for the first time.

I printed both and framed them together.  They sit on my desk at work, and no one ever asks about the odd juxtaposition.  I talk about it any way. 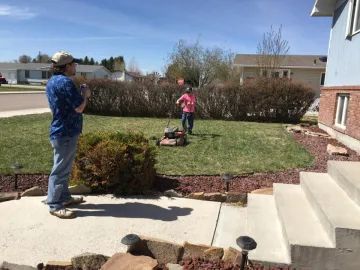 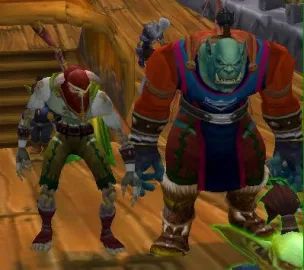