Homework, Dancing, and a Confession 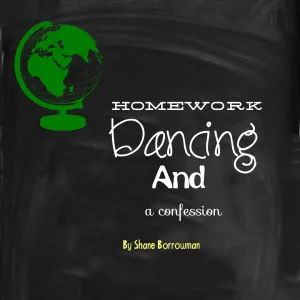 I’d do anything to get out of PE in late elementary school.  During that time, I developed my first crush, and PE was a mixed class.  So while Tabby wasn’t actually in my regular class at West Elementary—now gone, just like my original grade school, Beaver Dam Elementary—she was in my PE class, and that was the year we started learning to dance.  At first, we learned ridiculous dances, like square dancing or an odd Polynesian style that involved jumping in and out of the space between two PVC pipes that were being rhythmically slammed together.  Neither of these has made an appearance in my life since then.  Thank God.

But we also learned to waltz, and learning to waltz began with the skinny woman who taught the class, along with the less-than-skinny music teacher, forcing the boys to approach the girls, asking them to dance.  In theory, this was a philosophically-sound class activity, and I’m sure the idea was that we’d break down any reservations we had about approaching girls, thus making middle school and high school less stressful.  In practice, this meant we rushed, in a stumbling and shoving mass, toward the same handful of pretty girls who would always agree to dance with the same pretty guys, thus reinforcing social hierarchies and keeping the skinny, ugly, and average in our place.

To escape this ritual, I’d deliberately leave my heavy boots on when we transitioned from our regular classroom to the gym.  Before the teacher could set us in motion, I’d ask to be excused to go to my locker and change into my tennis shoes.  I could stretch this simple procedure for ten minutes.  When I returned to the gym, I’d ask any unattached girl to dance, and she’d agree before I finished the question…already upset at being sidelined in the original herd Q&A.

I remember that pattern of behavior not because it was brilliant but because it inadvertently led to a horribly embarrassing moment with one of my favorite teachers, something so awkward that I’ve never told the story to anyone in the 34 years since it happened.  In retrospect, I bet he filled out some official paperwork immediately afterwards, however, just in case a lawsuit resulted.

I was sitting on the hallway floor, slipping one boot off and reaching for a tennis shoe.  As he walked by, my teacher reached down, snatched up my boot, and kept walking.  I threw myself forward and to the side, still sitting, reaching out with my left hand, grabbing for the boot.

Simple enough.  He pulls a quick, harmless, keep-away sort of prank.  I get my boot back immediately.  We both go on with our lives.

Except I didn’t get ahold of my stolen boot when I grabbed for it.  I got a handful of his crotch.

I have no memory of him giving me the boot back.  No memory of exactly what happened next in that deserted hallway.  I’d guess I hurt him pretty good, given how hard I squeezed “my boot.”  I’d guess he dropped it and kept walking without saying a thing.  I certainly never mentioned it.  Ever.  But I’m a writer now, he’s retired, and there’s a statute of limitations on talking about humiliating accidents.

Since I’m confessing, I’ll mention that, years later, I dated his daughter.  He never knew.  Probably still doesn’t.  Sorry, man, about your daughter and the accidental nut grab.

The other thing I remember from that year is having homework.

My kids are in that same grade now, the same I was in when I learned to waltz and to never speak of accidental groping, and they almost never have any homework.  It freaks me out.

John and Sam were in the same half-day kindergarten class when we lived in Nevada.  They regularly had small amounts of homework.  In kindergarten.  Since then, we’ve kept them in separate classes, working under the assumption that it’s an important way for twins to develop identities of their own, identities entirely separate from one another.  So, in the years since then, we’ve had the opportunity to see ten different teachers at work, more if I count the classes that put them into contact with other teachers—music, PE, etc.

Under the best circumstances, they have teachers who keep them on the same basic schedule and require the same general amount of homework.  That’s what happened at the beginning of this year, and it was awesome.  I look like Forest Gump trying to help them with Math or bumbling my way through Science.  Being on the same schedule—but having different strengths—allowed them to help one another.

That story ended by Halloween or so, and they now seem to finish all of their “homework” during “study hall.”  This baffles me, given that I didn’t have a “study hall” to waste time in since at least my junior year at Anaconda Senior High School (go Copperheads).  Their grades are pretty good, and I’m not going to complain and thus become The Dad Who Caused Everyone to Get Homework.  We’d have to move, possibly even go into the Witness Protection Program.

But I do worry.  I’ve seen the results of a no-homework approach to education.  For a year, one of my twins had almost no homework…as the teacher skated through a final year before retirement.  The other twin had homework almost every day.  When the next year started, the differences in their abilities were stark.

I know that the issue’s complicated.  Not every kid has a home in which homework can be done—because there’s literally no home, because there’s no parent or other adult to help, because the simple focus on getting enough to eat or dealing with some form of abuse makes homework a luxury.  I know that teachers feel under-paid and have every reason in the world to limit the work that their students do outside of class time, thus limiting the amount of work they must do in their already strained amount of free time.  I know the frustration of teaching to government-mandated tests, know that every minute of the school year is accounted for before the year even begins.

Education is cumulative, though, and I get worried when I think about next year because any future successes will be built upon the successes and failures of the present.

So I trust their teachers, and I push John and Sam to read and to write and to follow the topics that interest them.  But it doesn’t feel like enough.  They haven’t even learned to square dance yet.