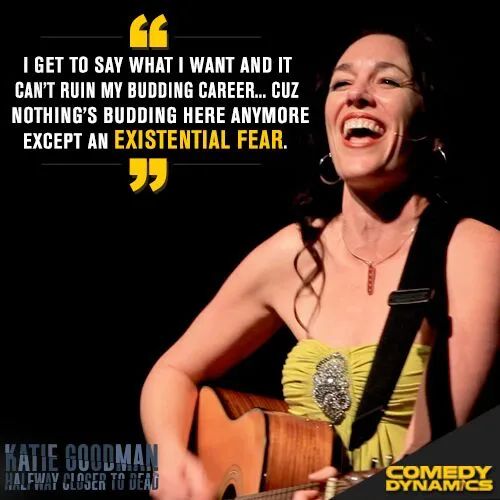 Halfway Closer To Dead, Katie’s follow-up album to the highly acclaimed I Didn’t F*ck It Up, is a feisty (and NSFW!) tour de force of songs from rock to rap to pseudo-opera. This second album is smart, political, personal and hysterical with songs ranging from her YouTube viral hit "If You're Homophobic, You're Probably Gay" to "Boobs," to slam dunks taking on The Tea Party and climate change deniers. Plus, yeah, sex jokes. Because, it's Katie.

Described as “a female Tim Minchin” by The Observer, Katie is an internationally touring musical comedienne. Her first album I Didn’t F*ck It Up, also released by Comedy Dynamics, was praised by Punchline Magazine for being “on par not just with any woman in modern comedy, not just with any music act in modern comedy but, categorically on par with anyone working the current comedy scene.” Katie has been seen on Showtime, Current TV and TruTV.

Katie just got signed with America's largest independent comedy record label, Comedy Dynamics! They are known for producing CDs and DVDs for Louis CK, Aziz Ansari, Kathleen Madigan, Janeane Garofalo, Tim Minchin, Bill Burr, and on and on. We are so honored to be a part of their roster.

"Hilarious! Fortunately there are the Goodmans of the world that can steer us back to reality." -Bustle Magazine

CLICK HERE  to purchase the new CD on iTunes!