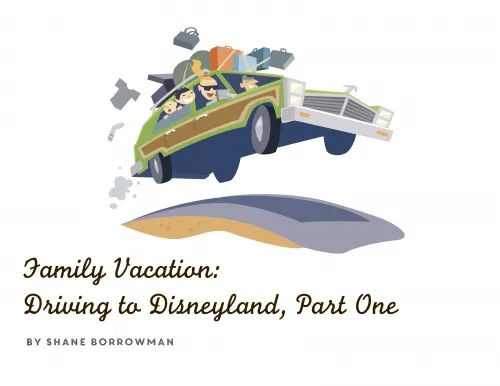 Note: In July of 2016, my family took its first vacation in three or four years--its first vacation to Disneyland.  This involved driving first to see my parents for a week, then driving to see my in-laws, then driving from Seattle to Anaheim (in a two-car caravan with my in-laws).  I do not travel well under any circumstances, but I travel especially badly when I drive for ten or more hours a day...for a couple days in a row.  When I drive for long distances, I go into an unhealthy zone, something probably similar to a full mental breakdown.  I stop talking after the first few hours and just spend the rest of the drive in my head.  Often, what I find there is disturbing, once the road has pounded me into submission.  With that in mind, I have tried to chart the arc of descent that I followed, mentally and emotionally and possibly spiritually, during the first half of our trip.

We head for Disneyland today, but first I have to see my doctor. I had some blood work done, and she has questions. Bad questions. About my cholesterol, my intake of bacon and gravy and deep-fried things. Two years ago, a similar conversation landed me on a no-sugar-no-starch diet for three months. I lost weight. I felt great. It was hell. I will avoid lying to her by focusing on my migraines, a classic rhetorical dodge.  She will ask about my blood test and diet.  I will respond by talking about headaches.  This will keep me from being on a diet on my vacation, a diet I would ignore fully after the first day or two, any way.

The kids wait at home while I dodge questions about my diet. They pack their bags. Sam grabs extra beef jerky. John packs two shirts and five pairs of sweats. My wife notices this and evens things out. I would never have noticed, not even when John wore the same shirts again and again but with different colored pants.  I suspect this makes me a bad parent.

Waiting for me to finish with my doctor almost kills John and Sam.  They have waited literally years to go to Disneyland, and I make them wait longer. Once we are on the road, I add to their misery by playing Twisted Sister all the way to Missoula. They object. I play Love is for Suckers twice to punish them. I consider myself very funny. I consider playing A Twisted Christmas but do not. That album gets saved for a more appropriate time, like Halloween or May Day.

Sam demands, somewhere west of Spokane, that I play her Spotify playlist. I give her a choice: Meatloaf or Bruce Springsteen. Like my headache dodge with my doctor, this is another classical move: I present the kids with two options, both acceptable to me.  If they accept that these are the only two options, then I win regardless of what they choose.  I tell them again: Meatloaf or Bruce Springsteen.  Sam confers with John. They reject my choices. Beth settles the matter by playing Me First and the Gimme Gimmes. I love her.

By the end of the day, I have driven over 500 miles, which I expected. My Fitbit says I have taken 4000 steps. That may be true if pushing the gas pedal to the floor counts as a step, I guess.

[Insert a week of drinking beer and reading in the backyard swing at my parents house. An awesome week.  I read Michael Punke's nonfiction about the 1917 mining disaster in Butte, a couple horror novels by Jack Ketchum.  I drink iced tea and lay on the swing for hours, only my right foot moving as it pushes me back and forth.  In a few days, that foot will be purple with broken blood vessels and sport a blister as big as a quarter.  I do not yet know this as I swing and read.]

Traffic is bumper-to-bumper from Seattle to Salem. I stare at the same semi for hours. It becomes MY semi. I stay close to his bumper. I protect him from other cars that want to force their way between us. I am so bored for so long that part of my soul dies.  The kids listen to music on their phones and play games on their Kindles.  They do not notice my pain, the mental and physical degeneration I'm going through as I hunch closer and closer to the wheel, back pain slowly bending me in half.

I changed my phone a few days back. The GPS now has a British accent. I begin to call my phone Moneypenny. At a rest stop, my son asks me who Moneypenny is. I explain this to him in the most condescending way possible, dripping sarcasm. He fires back with his own sarcasm: "James Bond is English?"

Sarcasm or not, I judge him culturally ignorant. He has no idea how many 007 movies we are going to watch when we get home.  I am exhausted and in pain and am nowhere close to Anaheim--or even Medford, where we will stay the first night.  Moneypenny is hard to understand. I keep having to ask Beth to repeat what my phone said. Five hours into the drive, not quite halfway, I begin to think I should have left my phone alone. It was happier as an American.  I was happier with it as an American.

We leave Washington and Oregon welcomes me.  A few miles later, Oregon welcomes me again.  I am tired, and this confuses me.  I already do not like Oregon, and I must cross its entire length, top to bottom.  As we pass by a sod farm, something I've never imagined but which looks exactly like a place that grows grass should, a random memory jars loose--something I will experience regularly for the rest of this day and all of the next: When Elizabeth and I had a house built in Spokane, a few years before the kids were born, we had a neighbor across the street named Megan.  She was maybe 22 and bought the home with her live-in boyfriend, who almost immediately dumped her.  He was gone, as I remember it, before the sod lawn was even installed, just after they moved in.  For no reason, my mind leaps from these two sod-related memories to Mary, a woman I knew in 1991 in a summertime Introduction to Poetry class.  The professor yelled at us if we yawned; one day, he yelled at Mary for silently yawning.  "I wasn't yawning," she yelled back at him, "I was about to scream because a spider just dropped onto my desk!"

I laugh to myself.  I begin to worry not only about the fact that I just remembered all of this, while driving at 65 MPH in semi-dense traffic, but also about the fact that I remember such things at all.  To allay my fears, I turn on Bruce Springsteen.  No one complains.  The road has beaten them into submission, too:  Everyone is asleep but me.

We crest a pass, and the summit is 1703 feet above sea level. I marvel loudly about the fact that somehow we are able to breathe without masks. Oregon is pretty, I point out, compared only to parts of Washington. Bless its heart, I note, it tries so hard, but it just doesn't live up to Montana. No one is listening to me. I laugh at my own pro-Montana joke. I am tired.  I realize that, consciously, for the first time. Later, we stop at a rest area. "Are you lost," John asks. "No," I tell him, "but I have been hallucinating for the last couple hours." He laughs. I'm not entirely sure that I'm kidding.  When John tries to wash his hands, the water will not come on no matter how much he waves under the faucet.  My faucet works fine.  I reach over and water begins to flow from his faucet as soon as my hand nears it.  "Sorry, man," I tell him in my saddest voice, "These things only work if you have a soul."  He shoves me.

Oregon hates me. It heard what I said about its looks. To punish me, Oregon forces me to sit in my car while someone I forget to tip pumps my gas. Oregon forces me to drive 65 MPH at best, 65 on roads where my Jeep is clearly capable of doing 85 or 90. On one random turn, signs demand that I slow down to 55 and then to 50. Then I am inexplicably told to STAY IN LANE for a couple miles while no road construction takes place around me. It's odd. Disconcerting. I would apologize to Oregon if I thought it would help. California will gang up on me, too, and force me to drive this slowly, but I do not know this yet.  I still assume, in my heart, that Oregon is the only unreasonable State I must pass through.

Like Oregon, and (later) California, Moneypenny hates me. But she's devious. She doesn't lead me into the middle of nowhere, which would be obvious. Instead, she leads me where I want to go...but by the most plausible-yet-indirect route she can find. It's maddening. I mumble about how much I hate her and realize that nine hours of driving have left me in a sad state. I arbitrarily changed my phones accent, then gave it a name, then assigned it a personality, then decided that it hated me. That may be a textbook arc of descent from mostly sane to totally paranoid. Okay. I still hate her. And fear her.

After eleven hours, I am finally safe in my room. "Moneypenny," I ask, "how far to Disneyland?"  She considers this for a moment: 716 miles.  I look at the map, see that there will be much more bumper-to-bumper traffic, wash my pain medication down with vodka before I even realize what I'm doing.

The kids are asleep.  I remind myself that their happiness is what matters and that they are having a blast, despite my crumbling.  Another long day will see us in Disneyland.  I feel an urge to weep, blame it on the vodka and exhaustion and pain medication, and go to sleep.

READ  Family Vacation: The Rest of the Way to Disneyland, Part Two

Shane Borrowman is a native of Anaconda, father of twins, and professor of English at The University of Montana Western.  He has published on a wide range of topics, including the development of boxing in Renaissance England, medieval Arabic philosophy, and American zombie films.  He is editor or co-editor of four writing textbooks and six collections of original scholarship. Visit http://www.shaneborrowman.com, home of Shane's blog, Kairotic Palaver