Even the Smallest Person Can Make a Difference 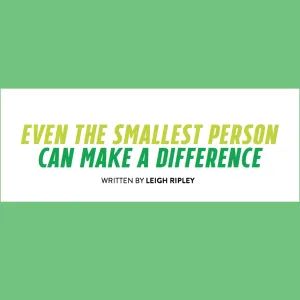 I grew up in New Jersey in the ‘70s and ‘80s. Yes, the visual is amazing – big hair, neon leggings, La Sac purses with raccoon tails dangling from the zipper, bangles, scrunchies – ugh. Another unfortunate visual? Jersey boys and girls rolling down the window on the freeway and chucking out a McDonald’s cup. I can hear your gasp right now. Yes, it happened.

When my oldest daughter was 5, we flew back to New Jersey to visit family. As we exited the highway (no, I don’t remember which exit), my daughter asked why there was so much garbage along the side of the road. “Don’t they have enough garbage cans?” she questioned.

I don’t want to mislead you into thinking that Jersey is an armpit of a state; it is actually very beautiful and rightfully called the Garden State. But it’s not Montana. Living in the most densely populated state in the United States, New Jersey’s residents rely on each other to keep it clean, but there are bound to be litterbugs among all those people. In Montana (number 48 in population density), where we might have more cows than people, the litterbugs have a smaller visual effect – only because there are fewer of them spread out over much more space.

Trying to explain this to a 5-year-old was challenging. Nonetheless, I tried to impress upon her that one green act, by even the smallest person can and does make a difference.

By no means am I the picture of green perfection. I used disposable diapers with all three children. I only recycle cardboard, paper, magazines and cans. I don’t compost. I leave the water on when I’m doing dishes. And due to the constant, annoying buzzing in my ears, there is always a TV on in my house.

But I do good things too. I don’t litter and I clean it up whenever I see it. I turn the water off when brushing my teeth. I donate gently used clothing to secondhand stores and food to the food bank.

I bring my own bags when shopping. As a family, we reuse and repurpose glass jars, plastic bags and use both sides of printer paper.

My point is: Focus on the good things we do and try to do a little more, because a little more counts. Sometimes I think about that day in New Jersey, especially when I am trying to encourage my kids to be better planet earth stewards than I have been. And so far, they are. At the very least, not one of them would ever even consider tossing garbage out of a car window.